#02. <Cheonggeum Sangryeon> Watching lotus flowers while listening to the sound of gayageum.
<<Hyewon jeonshincheop>>, a.k.a <<Hyewon Pungsokdocheop>> was produced by Shin Yun-bok (Pen-name is Hyewon), a painter of the late Joseon Dynasty, consists of a total of 30 genre paintings. Shin Yun-bok is a painter with a free spirit and left few records of him. His work only began to be recognized 100 years after his death.
His pictorial description of people, landscape, especially women are stellar. His series contain a critical view of the social status in the late Joseon Dynasty.
I'm currently working on a project to reinterpret his phenomenal series. Reinterpretation is a series of genre painting set in modern Korea, and it will be intriguing to find the same and different points between the two works.

It's the end of summer. This year's summer was exceptionally loud. Heavy rains in 115 years that hit the Korean Peninsula in early August caused a lot of damage. In a sudden defenseless situation, we had nowhere to escape. In particular, the area around Gangnam Station was severely damaged, and I was very surprised to realize that the victims were just around the corner.

A few weeks later, the sky is high and blue. The wind is clear and cool like forgotten such a terrible thing happened. Autumn is coming. So before it's too late, I introduce <Cheonggeum Sangryeon>, which depicts yangbans (noblemen) enjoying their leisure time by the pond in a luxurious house.

The meaning of <Cheonggeum Sangryeon> is "watching lotus flowers while listening to the sound of gayageum." This work is also called <Yondang Yayu>, which means "Spending spare time by the lotus flowers" The title of the work was not determined by the artist, so various names are given according to the content of the work.

On the upper right side, there is a description of the picture written by the artist, Hyewon, which is also interpreted in various ways by researchers.

It says 座上客常滿  酒中酒不空, means "The seat is always full of customers, and the liquor is not empty/ Get drunk on the beauty of women." It is interpreted in various ways according to implication. Hyewon was a master of "imagination", so I believe that 'get drunk' means not liquor, but women are more relevant and make sense. Also, there's no alcohol in the picture. Like the home of K-pop, music is not left out in this scene.

In the original painting, there are three noblemen and three women who appear to be their partners. Considering the appearance and face of the yangbans, they are quite old, and the kisaengs have very young faces. Given that there are lotus flowers in front of it, it is a courtyard of a truly wealthy mansion with a pond in it.
It is clear that the man sitting on the left and does not wear a gat is the house owner, and he is focusing on something with a his partner who is sitting on his lap. What is he doing with the invisible hand?
The man standing next to him can be interpreted two ways, whether he is looking at them with envy or regret. Is his gaze representing the reader's view? Next to him, his partner only smoking gombangdae with a bored look. 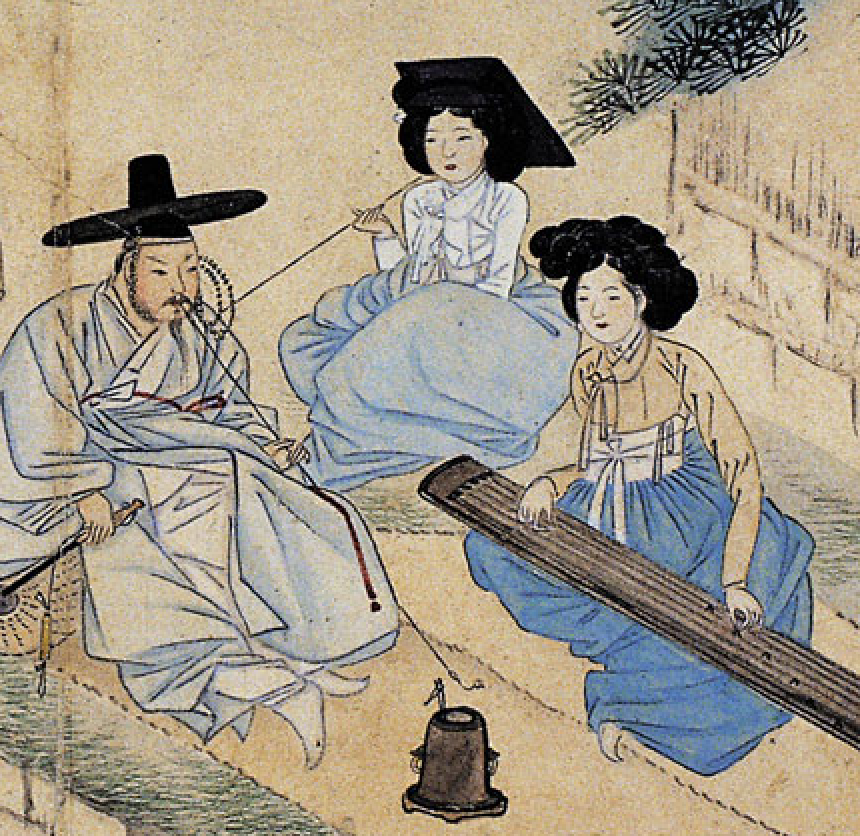 The reinterpretation was directed as a scene in which three rich men pair up and enjoy leisure with young girls in a luxurious house with an outdoor private swimming pool. The man in the front is chatting with a charming girl drinking alcohol, and the woman in the back is enjoying the sun while tanning. She's obviously bored, but her sunglasses help to hide her face expressions. 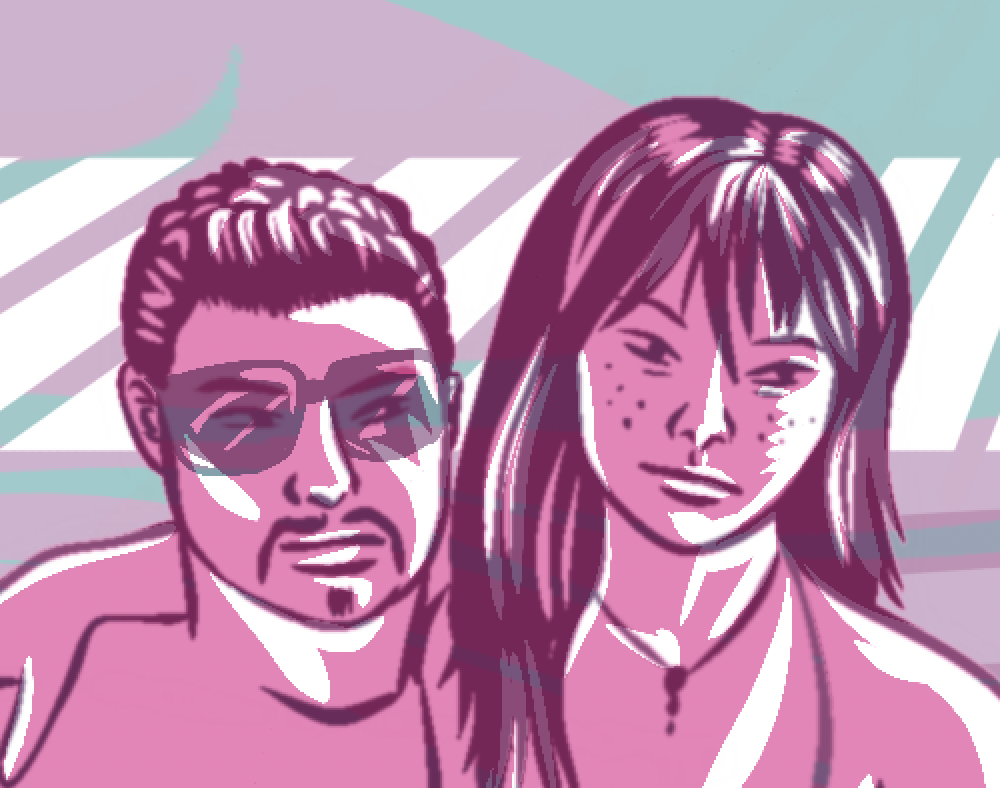 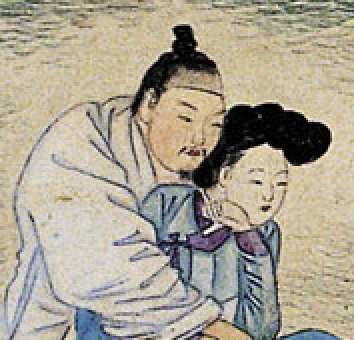 The couple on the left sat the woman on the man's lap as if they were close enough or already in a relationship. The freckled woman's face looks young and rebellious. Women wore bikinis and monokinies to emphasize their health, sexiness, and the power of youth. What is the man thinking, glancing at the woman sitting on his lap? 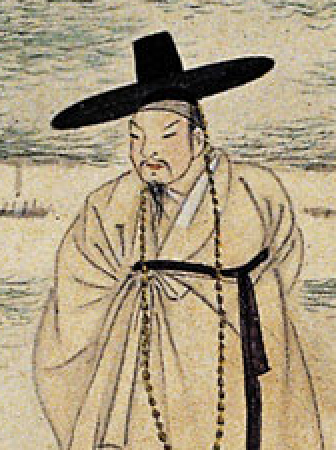 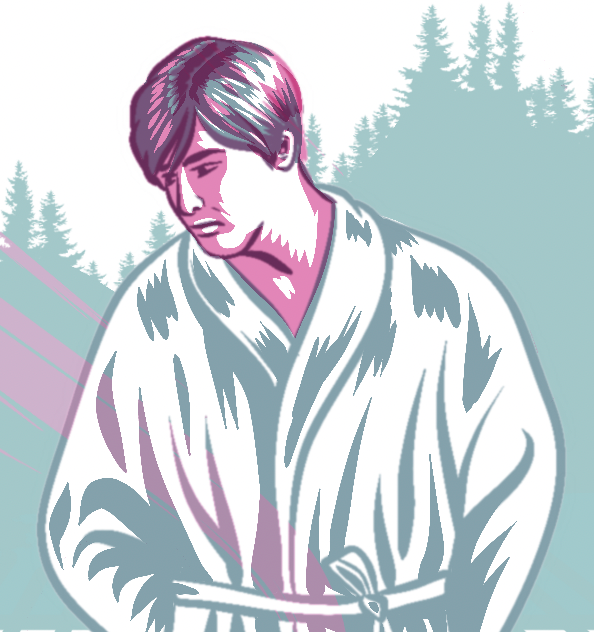 Like the original piece, there is a standing man who is staring at the couple next to him. He wears a gown because he is probably afraid of sun burning, or shy on his belly to show. Nor is he interested in his partner. 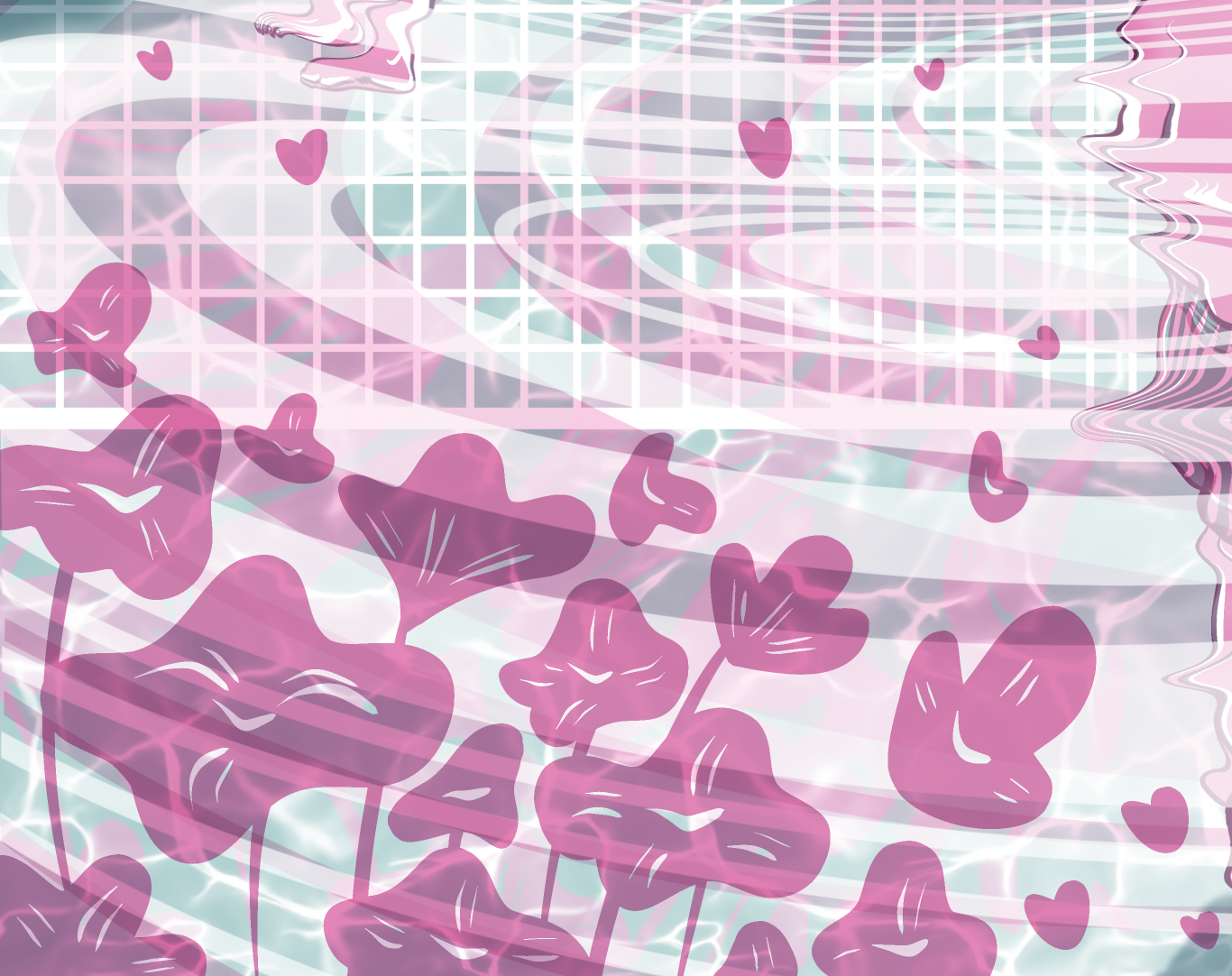 In harmony with them, the tropical leaves of plants to enhance the atmosphere. In the lower left corner, lotus are placed in the same position as the original. Heart-shaped petals are flying toward them.

Prostitution has continued since the Joseon Dynasty. The worst thing is that even children and teenagers are targeted. In my work, men seem to be more than 30 years older than women. Of course, this work did not depict such crime scenes, but it certainly does not seem to be an appropriate relationship.

It is hoped that the damage caused by heavy rain in 115 years will be recovered as soon as possible and hope there will be no more disasters between nature and humans.
↑Back to Top